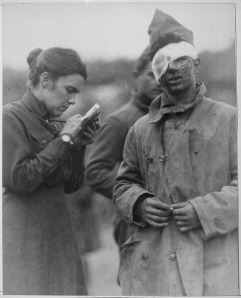 As a single woman in 2012 I often look around and wonder where all the single men of my age are. I should not complain! Imagine living in the UK, the US or Australia during the last year or two of World War I (or any major conflict for that matter) and every day seeing maimed and disfigured young men back from fighting; trying desperately to adjust to their new lives as invalids. If you were in your early twenties during those years it was highly probable that you would remain single – so many future husbands lying in cemeteries in Europe instead of alive and well and looking to the future.

In my manuscript The Grey Silk Purse Phyllis has just encountered, in a Sloane Square cafe, one such disfigured young man:

‘When I glanced towards the young man his face took my breath away. It was ravaged beyond belief. One eye appeared to be sewn shut and part of his face from his left forehead down was gone. In that instant I also noticed that his nose looked strange and his lips were shiny and bulbous.’

My character manages to stay calm. I don’t think I would have been able to. During the latter stages of WWI young men such as these were given new faces at The Tin Noses Shop as the Tommies called it – the real name being Masks for Facial Disfigurement Department at the 3rd London General Hospital. There was also some marvellous work being done at Sidcup by pioneer plastic surgeon Harold Gillies  http://en.wikipedia.org/wiki/Harold_Gillies and during WWII Archibald McIndoe, Gillies cousin http://en.wikipedia.org/wiki/Archibald_McIndoe who worked for the Royal Air Force and  operated on badly burned aircrew.

During WWII my English aunt who was a WREN was stationed near the hospital where McIndoe operated and was instructed to smile and not flinch when she encountered the aircrew wandering the grounds, recuperating after their operations.This memory of hers relayed to me is the inspiration of the scene I just completed today – art immitating life.